Care for children, the sick and the elderly – still done mostly by women – is an elementary function in our society, which provides a basis for the whole economy. Therefore the Friedrich-Ebert-Stiftung jointly organized a conference together with the Hungarian Women’s Lobby and the Democratic Trade Union of Crèche Employees to cover the most important issues of care from an economic perspective on May 30. 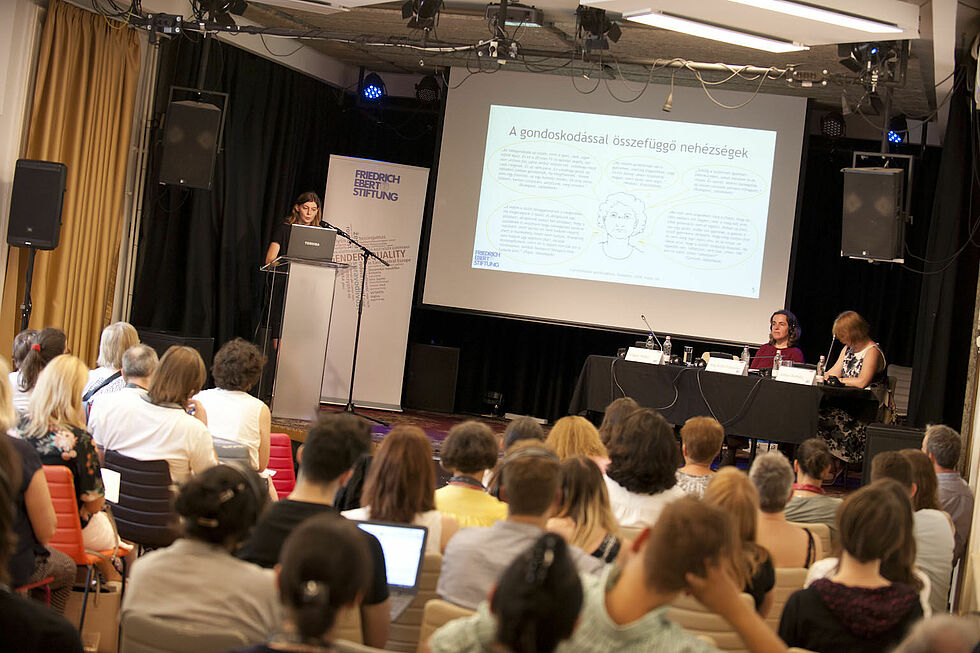 At this international discussion scientists and activists pointed out that it is not enough to only talk about the gender roles in society but to implement a social infrastructure in the framework of a social welfare state. The still prevalent view of the human behaviour as a perfectly rational, individualistic, profit maximizing homo economicus, is the root of those biases and prejudices that hide the elementary function of reproductive work done by women in society. A significant part of the problem is the deficit of the state care system: very small allowances, limited eligibility and deficits of institutions and services. As a consequence, it is impossible for women (and men) to perform tasks related to care without making a lot of personal sacrifice and asking for the time and energy of other family members, unless they have the means to pass the burden by hiring women migrating from the periphery and the semi-periphery (in Western Europe), or, in the case of Hungary, from lower classes. Without any support in caring for children and elderly people middle-aged women are seen as a factor of risk for many employers. Investing in the social infrastructure, therefore, has an impact not only on employment, but also on gender equality. The researches show that it pays off more to invest in care than in the construction industry. This is partly due to the fact that care is a much more work-intensive sector than construction, and partly because of the very low wages and shorter work-time currently typical to care industry. For many reasons care has been an underrated issue in the social dialogue for too long. It’s time to emphasise its importance in a social and economic context.

You can find a report about the event in English here, in Hungarian here.