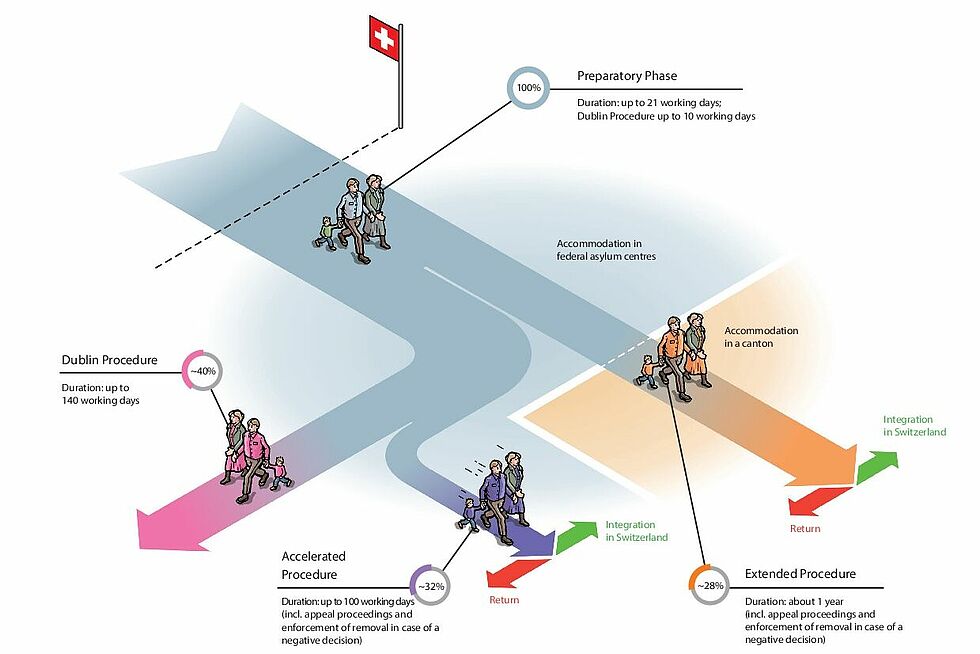 Nine years ago, an asylum procedure in Switzerland lasted an average of 1,400 days, from the submission of the application to the final regulation of residence or departure. From 1 March 2019, a new procedure will significantly shorten the waiting period. The majority of final asylum decisions will be made within 140 days. The new procedure divides Switzerland into six asylum regions: Western Switzerland, Tessin and Central Switzerland, Eastern Switzerland, Northwest Switzerland and the cantons Bern and Zürich. Federal asylum centres were set up in each region, one of which has the “procedural function.” Also, further federal asylum centres are envisaged with “waiting and departure function.” This will bring federal accommodation capacity up to 5,000 places across the country.

The new set-up promises to streamline processes and accelerate asylum pro­cedures. The procedure is based on the Dutch model, adapted to Switzerland’s fe­deral context. However, room for improvement remains within the areas of appeal time limits, process coordination, quality assurance and independent legal representation.

In his guest article for the FES, Dr. Constantin Hruschka, Senior Research Fellow at the Max Planck Institute in Munich, explains the most important innovations and describes what other European countries can learn from the Swiss model.

Read the current article from the Q&A series here.